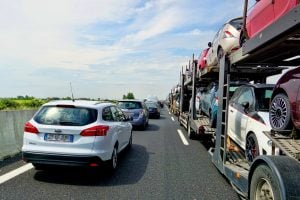 B.C. drivers are paying far more for car insurance than our Albertan neighbours. In fact, that number can rise up to 42% more than Alberta, according to a study released Tuesday.

The study comes from Calgary-based accounting firm MNP, which looked at ICBC’s rates, compared to others in Alberta.

RELATED: Vancouver Spends More Time Stuck in Traffic Than Any Other Canadian City

It compared brokers for 14 drivers within the two provinces. Then, it looked at each driver’s prices with the same vehicle and coverage.

As an example, MNP compared a Surrey and Calgary driver. The study showed the 49-year-old Surrey business-owner would pay up to $573 more than the Calgary driver, who both drive the same 2014 Ford F-150.

Essentially, both provinces are paying for the same package, but with different prices. There is one key change between the two, however.

And that’s because “the Insurance Corporation of British Columbia (ICBC), a Crown corporation, has a monopoly on mandatory auto insurance in B.C. while in Alberta, drivers have choice,” stated IBC.

Perhaps this is why BC residents have a hard time trusting ICBC, and why the government is now opening a “Fairness Office” to try to change that.