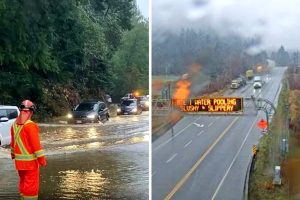 Brace yourself for another atmospheric river is coming.

According to Environment Canada, there will be another 50-100mm of heavy rain coming down in the Fraser Valley and Metro Vancouver regions. The heavy rain expected will start tomorrow on Tuesday, November 30, 2021.

This will make it the third atmospheric river to hit the region in under one week. Crews are already preparing for more potential flooding.

Due to the system’s prediction, Environment Canada has issued a special weather statement stating that the following areas can expect a “prolonged period of heavy rain”:

Adding some more depth to the rain, there will also be strong southeasterly winds of up to 60km per hour.

Here is the order of events roughly expected:

Given the severe damage seen by the previous rainstorms, residents are being warned to see water pooling on roads and even local floods where there are low-lying areas of land.

Places such as Abbotsford are taking precautions to brace themselves. More properties were placed under evacuation order amid flooding in Abbotsford Sunday, City of Sumas has been activating its flood siren to warn locals about rising water levels.

This atmospheric river rain combined with rising freezing levels and snowmelt all contribute to the intense floods we are experiencing.

Unfortunately, after weeks of being bombarded by rain, it appears that we aren’t out of it yet.