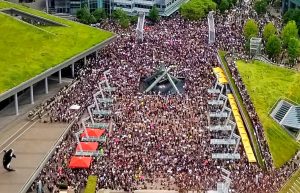 Thousands of passionate people took to the streets of downtown Vancouver Friday afternoon in support of Black Lives Matter and to voice their concerns about racism in Canada.

This is the second anti-racism protest in Vancouver since the killing of George Floyd by Minneapolis police. The initial protest took place earlier this week and drew thousands to the Vancouver Art Gallery.

According to Vancouver Police, the crowd size was estimated to be between 5,000 to 10,000 people.

The majority of people in attendance were seen wearing masks to prevent the spread of COVID-19, a major risk that concerned health officials after Sunday’s protest.

While multiple Vancouver businesses boarded up their shops earlier in the day due to fears of riots, the protest was respectful throughout its entirety.

RELATED: Black Organizations And Anti-Racist Groups You Can Support Now In B.C.

Here’s your photos of Friday’s protest at Jack Poole Plaza: