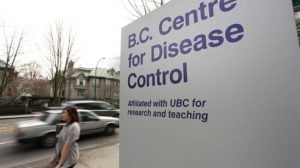 Photo: BC Centre For Disease Control

The first case of the Wuhan Coronavirus has been confirmed, health officials in British Columbia announced on Tuesday.

Dr. Bonnie Henry, a provincial health officer, said that the patient is a man in his 40s that regularly travels to China for work. He tested positive for the virus late Monday and is currently recovering in isolation at home.

The B.C. Centre For Disease Control (BCCDC) conducted the first test, but is also waiting for Winnipeg’s National Microbiology Lab to corroborate the results, a process that can take up to 48 hours.

However, “we are confident that this is truly a case of this novel coronavirus”, Henry said.

The patient was reportedly in Wuhan until he arrived back in Vancouver last week, likely before the Chinese government implemented its historically-large quarantine of Wuhan.

The incubation period, the time between becoming infected and symptoms manifesting, for the Wuhan Coronavirus has not yet been firmly identified, but the man reportedly did not see the symptoms until over 24 hours after he returned to British Columbia.

Thankfully, the man was aware of the danger and took precautions to limit his exposure to others.

“He did not go out because he was concerned. When he had his onset of symptoms, he called ahead and went to a clinic for assessment. He was very conscious about this”, Dr. Henry said.

Various experts have questioned the virality of the virus. Family members of some of the initial patients in China were reportedly not infected.

The BC Ministry of Health and BCCDC reiterated this sentiment, saying that the risk of the virus spreading “remains low at this time.”

The genome structure of the virus has already been mapped out and shared with experts. CNN reported last week that a vaccine for the coronavirus is already in the works.