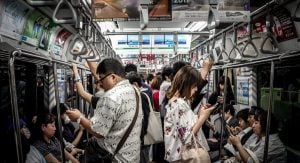 The capital city of Wuhan in the Hubei province of China is currently undergoing an unprecedented quarantine, in terms of scale, in hopes of cutting off the spread of the coronavirus.

Entire cities are being cut off from the outside world, with planes, trains, and public transit in and out of the city completely shut off. As The Atlantic calls it, it’s a “radical experiment in authoritarian medicine.”

And one of those people under quarantine is unfortunately a woman from right here in British Columbia.

According to Global News, Lauren Williams of Langley is currently in Wuhan with her two-year-old son, James, and husband, Tom, who has been living and working in Wuhan for several years.

Adding to the concern, however, is that Lauren is 35 weeks pregnant.

“We’re due to give birth in Wuhan. That’s becoming a little bit more risky as time goes on”, the family told Global News.

Experts have questioned China’s decision to implement this unprecedented quarantine.

Some argue that it came too late, considering there were cases in Wuhan reportedly as early as the first week of December. For weeks, the Chinese government, led by China’s President and General Secretary of the Communist Party of China, Xi Jinping, did not reveal that the outbreak had spread outside of Wuhan.

Others applauded the swiftness of how quickly the government was able to implement it, as well as how quickly Chinese scientists were able to map and share the genome structure of the coronavirus, allowing for scientists around the world to begin developing a vaccine, something that is already happening according to CNN.

Still, some worry that the quarantine might exacerbate the situation. Social order may begin crumbling if things like healthcare and food are not managed well. Hospitals themselves may even contribute to the infections, unintentionally keeping patients who have the regular flu with those who have actually been infected, due to the similarities of the symptoms.

“If you wanted to create the perfect mixing vessel for a coronavirus, you’d create the emergency rooms in Wuhan right now”, Michael T. Osterholm, director of the Center for Infectious Disease Research and Policy at the University of Minnesota, told the New York Times.

Another expert, Dr. Tom Inglesby, an infectious disease specialist and Director of Health Security for the John Hopkins Center, said that “At a macro level, it seems to me that it’s more likely to be harmful than helpful in controlling the epidemic.”

Nothing spreads like fear, however, and the Williams are undoubtedly aware of this.

“It is what it is. You can’t control these things sometimes. We’re trying to have hope instead of fear.”