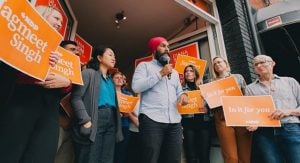 With the federal election happening today, and some people are talking about a coalition government.

Last week, NDP Party Leader Jagmeet Singh said in an interview that he would consider forming a coalition government with the Liberals.

“We’re going to fight a Conservative government, gonna fight it all the way,” said Singh in a B.C. campaign event.

Singh has since dialed back on this statement saying his primary goal is to focus on his own electoral campaign, as had Justin Trudeau when asked about the coalition.

But with the idea now on the table, people are wondering what this could really mean.

What Is A Coalition Government?

A coalition government occurs when two parties form a temporary alliance in order to create a majority. This will ultimately allow them to form government and pass legislation.

And with Liberals and Conservative both toeing the line of about 32% of projected votes, it seems unlikely there will be a majority government.

So, for Liberals and NDP to form a coalition, the two parties would have to discuss some important details. They would need to decide who to fill each leadership role and how cabinet positions would be divided.

But a coalition government is not common and usually only happens during difficult times, like during a war.

It has only happened once in Canada, in 1917. In 2008, Liberal and NDP tried to form a coalition when Stephen Harper was elected. However when it came time in January 2009, the Liberals’ leader, Stephane Dion, had resigned.

The Liberals’ new acting leader, Michael Ignatieff, did not support the coalition, and so it did not happen.

Trudeau would have to sign on to make the coalition happen this time around, but when asked about it, he eventually replied, “My focus is on electing a progressive government and stopping Conservative cuts.”

Only time will tell, after today’s results.