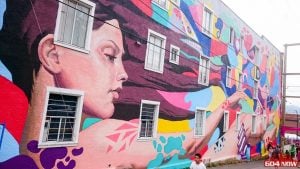 In 2016, Vancouver’s first ever mural festival hit the streets. It brought over 40 new murals to the city in Mount Pleasant and Strathcona neighbourhoods. The success of the inaugural festival has allowed for more festivities in 2017. Not only did artists undergo a week long painting process but gained opportunities to engage and connect with the public at nightly events.

All events led to VMF’s Mount Pleasant Street Party. This closed off 9 blocks of traffic and attracted an estimated 100,000 people in celebration of public art and community. Accordingly, VMF 2017 addresses three main themes central to Vancouver and its residents. The themes include, transforming and reclaiming laneways, Indigenous placemaking and combatting cultural erasure and destigmatizing graffiti art. 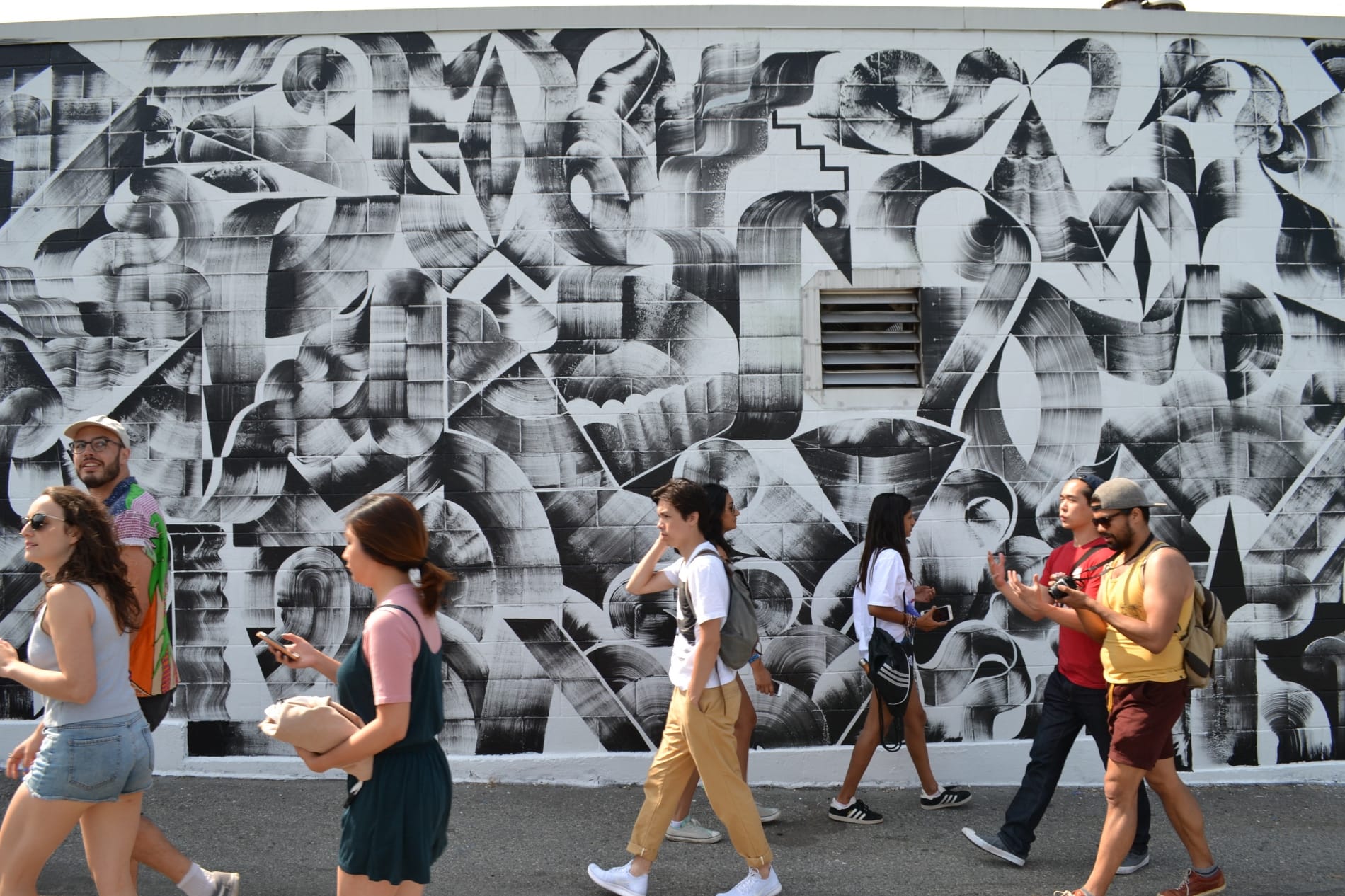 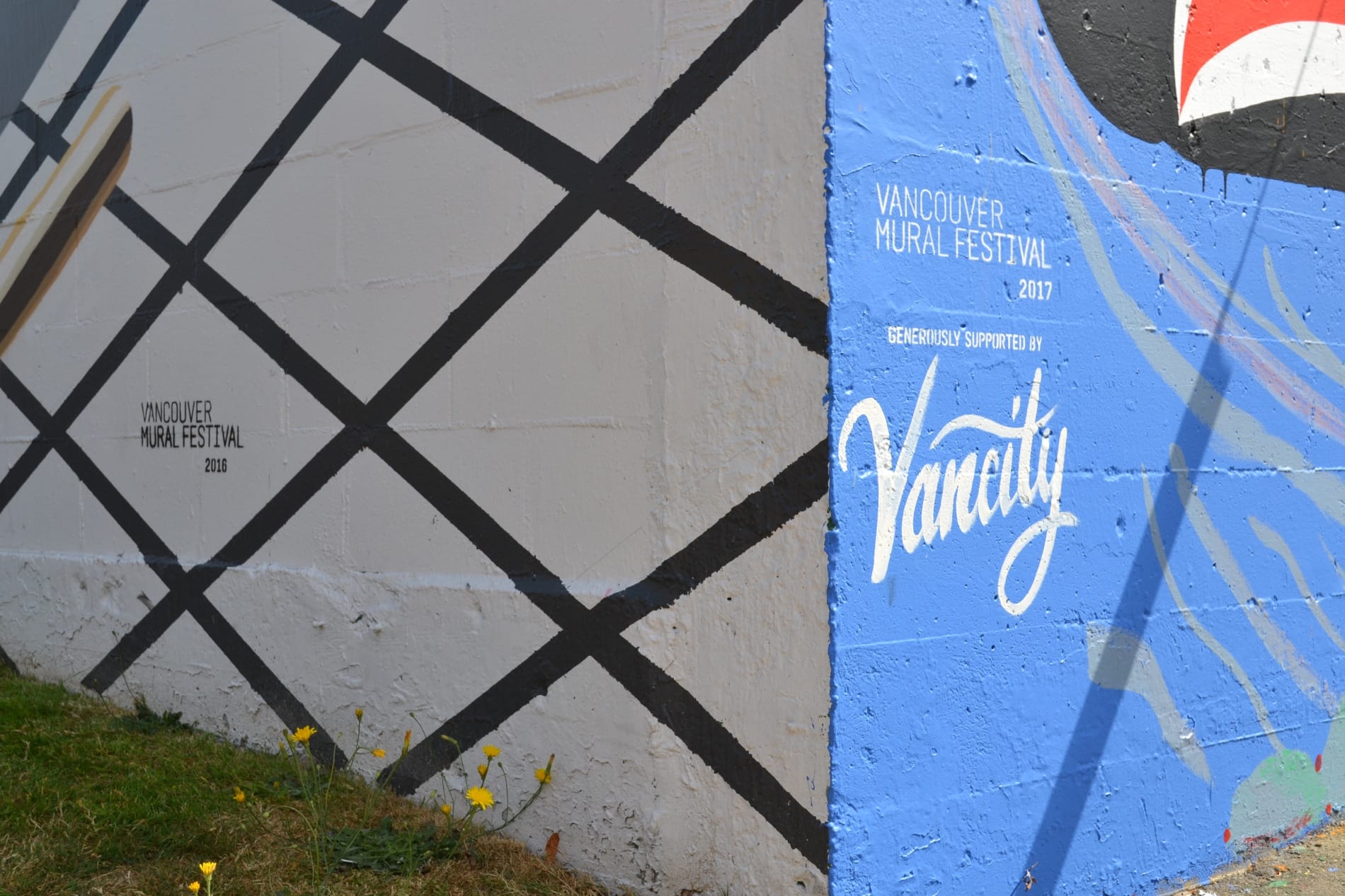 Laneways are not usually considered the most glamorous of places. With this said, there are plenty of laneways in Vancouver that serve as important arteries for city services. The municipal government, community organizations and local businesses have cooperated to transform laneways into accessible public spaces. This is to actively involve community through art and events.

Nearly half of the murals for VMF 2017 cover six-blocks of a Mount Pleasant laneway. On East Broadway and East 3rd Avenue, between Main Street and Quebec Street, it’s location is behind F as in Frank, the Fox Cabaret and City Motor Hotel. This is already a mural hotspot resulting from VMF’s inaugural festival in 2016. However, with new murals added to this area, a creative way of re-imagining a space, not often thought of as beautiful emerges.

Utilizing laneway walls as a canvas to beautify space, promotes opportunities for public squares, human level design in the city and shop opening their doors into the laneway. Furthermore, VMF hopes to see continued investment of these features. Not only might this lead to new approaches for traffic management and garbage removal but will continue to encourage pedestrians, residents and tourists to use the laneway as an active city space. 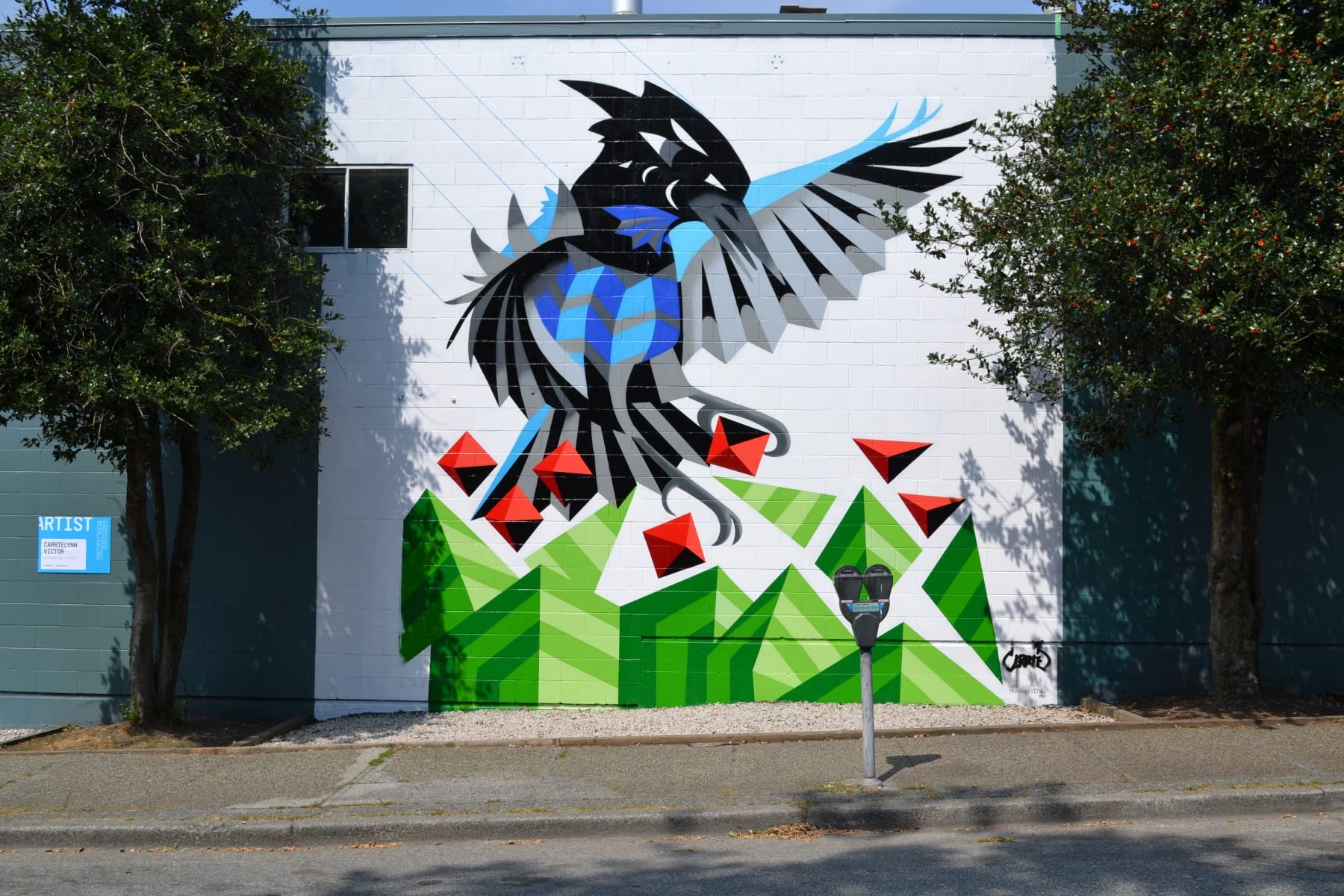 From its inception, the Vancouver Mural Festival has celebrated First Nation artistry and culture. In its second year, it built on the progress made in 2016 through increase in representation and continuous learning about the issues that impact Indigenous communities, artists and organizations.

Through concepts of Indigenous place-making and visual sovereignty, public art as well as murals are an avenue for artist visibility and way of combatting cultural erasure. Furthermore, all of the pieces curated for this event stand as a firm reminder of Vancouver’s local history and interminable need for reconciliation between non-indigenous residents and members of First Nation communities. 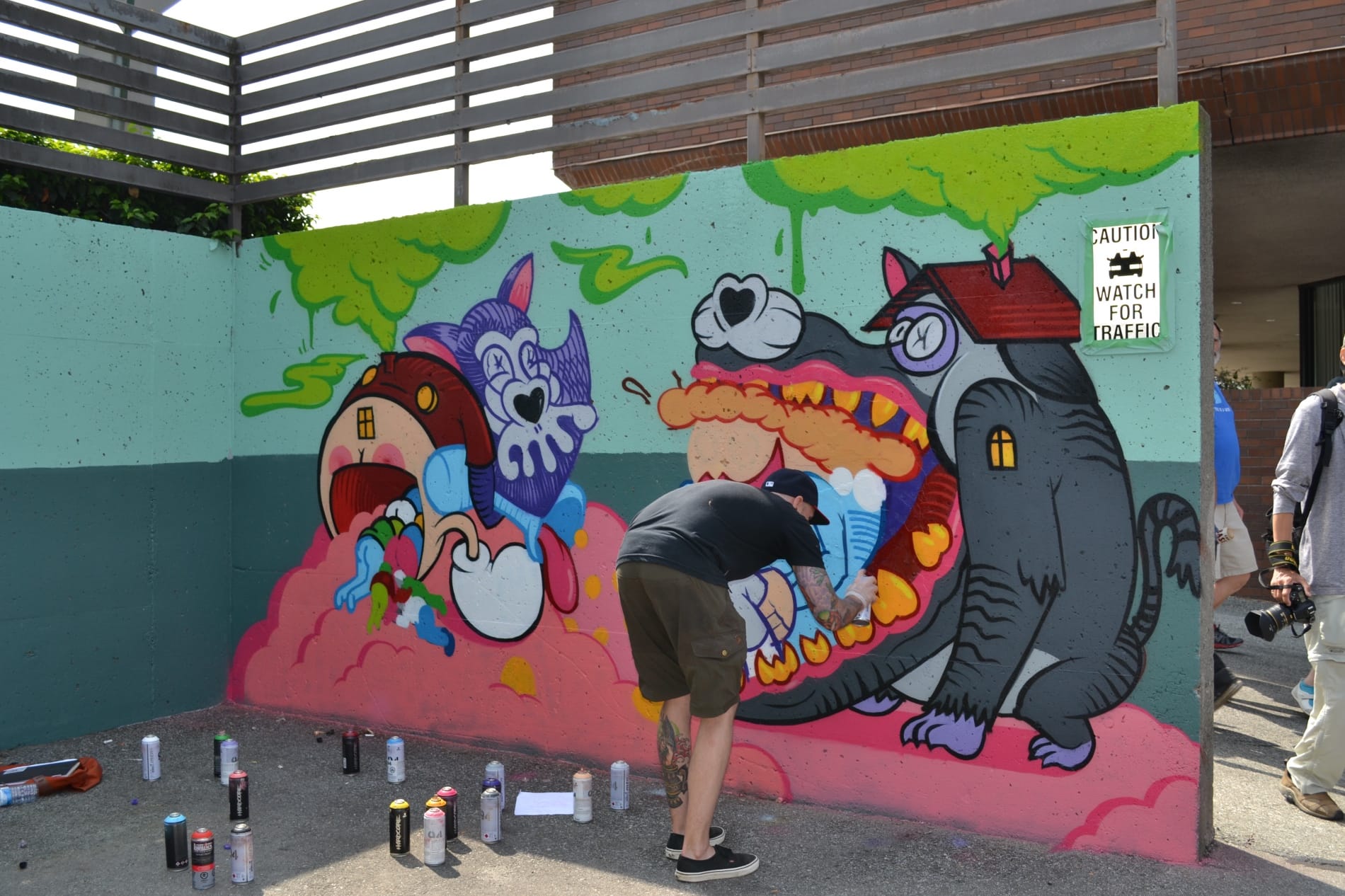 Rather than gaining respect as a credible art form, Graffiti is often stigmatized as vandalism. Nonetheless, the VMF team is working hard to change this perception and began, in 2017, with the reunion of Vancouver’s very own graffiti kings. For the first time in 10 years, AA Crew artists Dedos, Tars and Virus, came together to paint VMF’s first graffiti mural on East Cordova and Campbell Ave.

The City’s policies surrounding the use of graffiti in public spaces, has made it difficult to understand the value of graffiti as art. Though stigmatized, it is important to recognized that graffiti can be a powerful mode of reclaiming neglected urban space. In many cities around the world it is in fact positively acknowledged in galleries and commonly featured on the street. To end ongoing censorship of graffiti art, VMF aims to separate such notions of vandalism. This was done not only through AA Crew’s graffiti mural but through the creation of open art spaces on walls and laneways. More free wall projects similar to those seen at VMF 2017 will be worked towards before 2018. 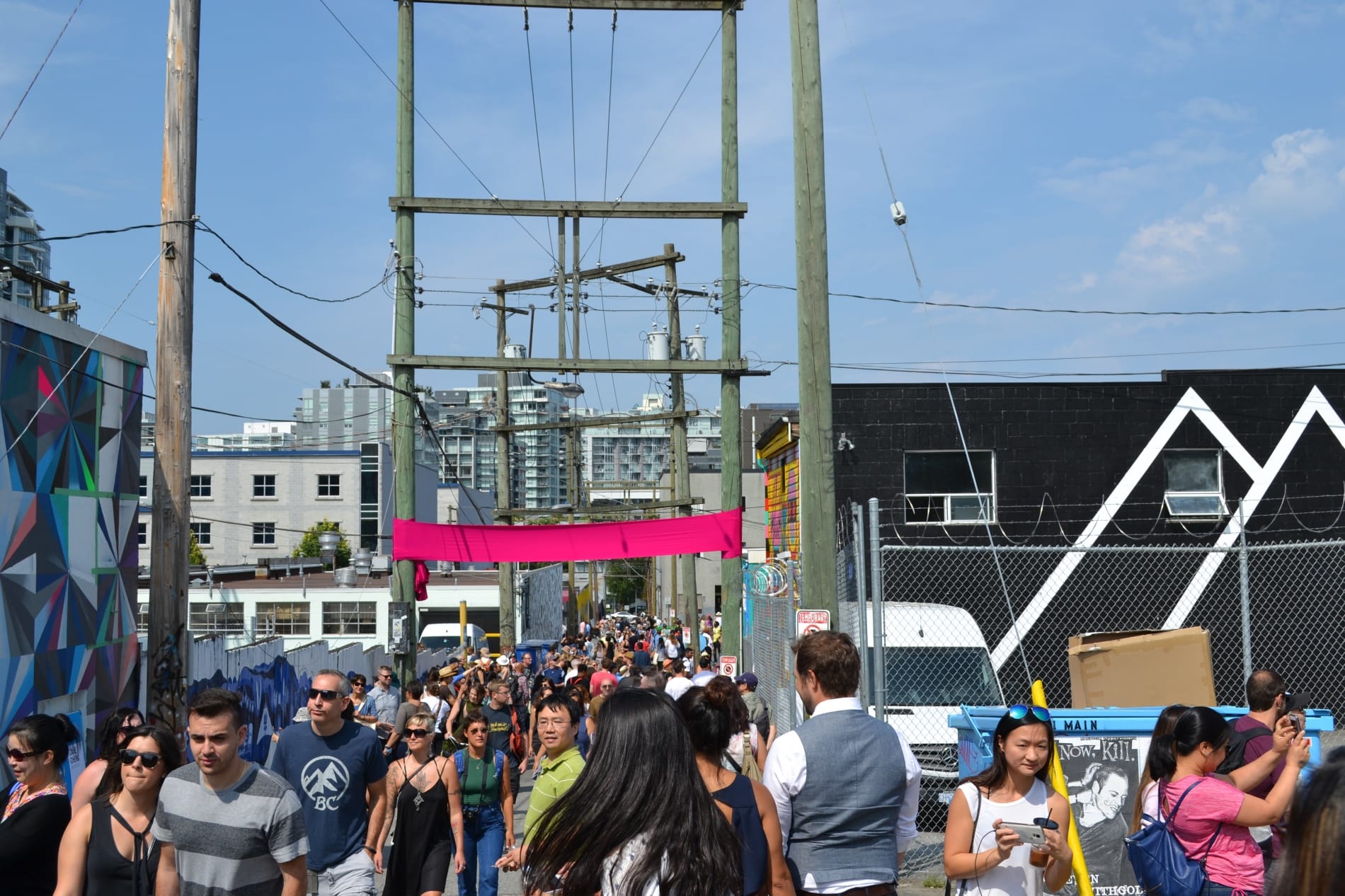 Mural festival is significant to Vancouver. It serves to increase possibilities of exposure for artists with diverse styles and backgrounds and contributes to Vancouver’s flourishing art scene. Murals change the way people act with the public spaces that surround them. Therefore, through art and transformation of public space, communities across Vancouver become connected.

Vancouver Mural festival serves as an open space to discuss the important issues it addresses. As a result, the art brought forward assists in raising awareness of these issues. Ultimately, VMF has the power to spark dialogue and affect policy. In addition, It’s a step towards positively influencing intersecting issues in Vancouver.