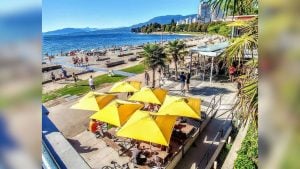 Vancouver is home to a couple of the best beaches in the world, and your dream of enjoying booze on them is one step closer to reality.

On Monday night, The Vancouver Park Board voted in favour of pilot projects that would allow people to drink alcohol in select public parks and beaches before the end of 2019.

Commissioner Dave Demers was the one who put the motion forward and it was unanimously approved.

Demers said he wants to see this change because many people in Vancouver rely on parks and beaches to relax.

The Commissioner’s motion also stated that 79% of people surveyed by the board this year supported alcohol sales at park board concession stands.

In October, the Vancouver Park Board finally approved a new Concession Strategy. This includes a two year pilot program to allow liquor sales at the English Bay and Kitsilano Beach concession stands from May through September.

Given a lot of beach goers “secretly” drink anyways, the move is designed to provide an area to legally do so, as well as help nearby condo-dwellers enjoy their backyard.

According to Park Board Commissioner Sarah Kirby-Yung, the pilot project in these two areas will allow the board to assess the feasibility of selling booze at other locations in the next three to five years.