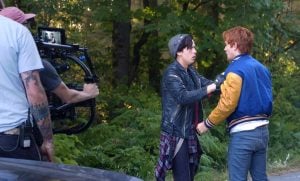 It may be the shortest month of the year but there’s a lot of TV shows in production in and around Vancouver!

There are some exciting streaming shows in production like Limetown starring Jessica Biel for Facebook Watch and See starring Jason Momoa for Apple. New Girl’s Lamorne Morris is filming the pilot Woke for Hulu, he was recently in town filming Valley of the Boom for National Geographic.

Twilight Zone which is being produced and hosted by Jordan Peele has been bringing a lot of special guest stars to town including Steven Yuen, Adam Scott, Kumail Nanjiani, John Cho and local star Jacob Tremblay.

Also in town is The Hurt Locker and Avengers star Anthony Mackie. Known for playing Falcon in the Marvel movies, he’s joining Season 2 of Altered Carbon on Netflix.

With a little support, she crosses the finish line. ❤️ #AMillionLittleThings

Season 2 filming from February 4 to June 25

New season. New sleeve. #AlteredCarbon has been renewed for Season 2. 🦄🦄

#AlteredCarbon season 2 has started filming in Vancouver, with Anthony Mackie taking over from Joel Kinnaman as the new Takeshi Kovacs.
DETAILS: https://t.co/Eu9uJzBrho pic.twitter.com/O1knEjjVTz

I swear to god that this wasn’t shameless promotion of @nockingpoint — That being said, this beautiful new hat is available in the December Coffee Club Shipment.

Is a cute puppy 🤓

Gabby Duran and the Unsittables

"Gabby Duran & the Unsittables" has received a straight-to-series order, and production is underway for a 2019 premiere on Disney Channel! Newcomer Kylie Cantrall stars as #GabbyDuran. @DisneyChannelPR pic.twitter.com/1oB1OxhlWE

Here we go! On set of #Limetown for @facebookwatch and I’m wearing my serious producer face to disguise my off the charts excitement! Let’s do this!

Happy new year everyone. Time to relax for a week. 😜🤙🏽. Aloha j

Save the oceans, save the mermaids. #Siren pic.twitter.com/rl8ekLswqb

one in a kryptosuit and the other giving side eye

The gang’s all back together tonight….we’ll sort of. Don’t miss the season 14 premier this evening. Or miss it…and have no idea what people are talking about tomorrow. Up to you. 🤷🏻‍♂️

Incoming message: #The100 returns Tuesday, April 30 on The CW! pic.twitter.com/crpM27jKnW

So thankful to have all of you! Happy Thanksgiving from #TheGoodDoctor 💛

Justice lives between this world and the next. #TheInBetween, coming soon to @NBC. pic.twitter.com/63GobI75dZ

The Man in the High Castle

Season 2 filming until May 10

Season 4 filming from February 25 to June 21

Alexandra Breckenridge and Martin Henderson to Star in "Virgin River" Series – Based on the Books by Robyn Carr https://t.co/vPXWGzAXUD

Lamorne Morris to Star in Comedy Series ‘Woke’ in the Works at Hulu https://t.co/G7hG9zGyob

Last month the fifth and final season of iZombie wrapped up filming in Vancouver. iZombie’s final season premieres on May 2, 2019 on CW. Also on CW, Legends of Tomorrow wrapped up its 4th season. TNT’s adaptation of Snowpiercer starring Jennifer Connelly and Daveed Diggs wrapped up its first season.

Related: 22 TV Shows That Filmed in Vancouver During January

CW pilot #TheLostBoys which adapts the 1987 cult vampire movie into a possible anthology series is expected to film in Vancouver this March.
DETAILS: https://t.co/jWugVMaULY pic.twitter.com/or0AZyoUpn