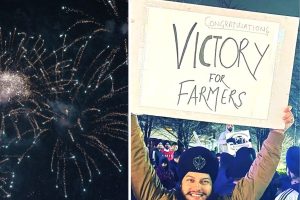 A year-long active protest turned into an active street party in Surrey on Thursday night as news of India repealing three laws affecting farmers was announced by the country’s Prime Minister.

The corner of Scott Road and 72nd was filled with a surge of joy celebrating the retraction of controversial agriculture laws in India that revoked farmer’s rights.

Cheers, fireworks, dancing and music filled the block throughout the night.

RELATED: Surrey is Getting a New Holiday Themed Light Walk With Food and Wine

Following 14-months of controversy and backlash, Indian Prime Minister, Narendra Modi announced that he would repeal controversial farm laws. Those same laws were the cause of many protests in India as well as several in Metro Vancouver. As a whole, this has been one of the world’s longest protest in history.

The protests initially began in September 2020, when the Indian government had proposed laws to deregulate farming in India. This would ultimately end guaranteed pricing to farmers, and have them sell their products directly to large companies. These laws threatened the livelihood of many farmers across the country, but have now been revoked.

1 am….kamm ton kal nu lagda chuti sariyan di! 🤪
The guy with a Jatt Trudeau sign in one hand and milk gallon in the other, can’t get more Punjabi than that! 🤣#Farmlawsrepealed pic.twitter.com/1u47MJj4qw

From Scott Road and 72nd – people are out celebrating the plans to repeal the three controversial farm laws. That’s the same spot they’d gone to rally many times before in support of the farmers – tonight they celebrate. @CityNewsVAN #FarmersProtest #DeltaBC #SurreyBC pic.twitter.com/zOmO97rsWZ

There is a loudspeaker blasting music, a chai and sweets table, a couple hundred people dancing and chanting and vehicles passing by honking their horns in #SurreyBC, as similar celebratory scenes play out around the world over the planned repeal of farm laws in India. pic.twitter.com/DzcpEUiybY

There were no reported incidents, and police were there only as an intervention.