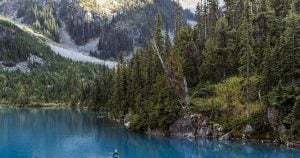 British Columbia is home to hundreds of communities of varying sizes. Giving them each a unique name must not have been an easy task. However, the names of some of these places will have you raising your eyebrows.

Intrigue got the better of us. These 6 places with bizarre names in British Columbia had us digging for more information on their namesakes.

RELATED: 10 Little-Known Facts About Vancouver You Probably Didn’t Know About

This was a real life fairytale! 😭 Horsefly couldn’t have been a more stunning backdrop for Elise & Christian’s wedding. It was a truly stunning day – in spite of a rainstorm! Congrats to the lovely couple, and their family and friends, who made this such a heartfelt, memorable day. We are so excited to share this excerpt from their wedding film. 🥂 . It is very meaningful to us, to be able to capture a life milestone like a marriage! We will be booking a very limited number of weddings in 2020. If you are a bride and would like to chat about videography, please DM me soon. 🥰 . . . #pgpops #cariboo #cariboochilcotin #horsefly #williamslake #beautifulbritishcolumbia #wedding #weddingfilm #weddingvideo #princegeorgebc #cityofpg #northernbc #filmmaker #videographer

Gold was discovered at Horsefly in 1829 and kicked off the Cariboo Gold Rush. According to hearsay, excited gold miners were unfortunately met with herds of horseflies. It did not take long to name the nearby river, lake and village after the buzzing pests.

Present day Horsefly is now a tourist destination known for its natural beauty. With plenty of lakes and trails,  there is no shortage of outdoor activities at this charming village.

What are the chances that a community north of Horsefly is yet another gold mining town? Likely.

The town was initially named Quesnelle Dam after miners flocked to the bottom of the Quesnel River in the late 1800s. After their postal office was moved, the townspeople decided it was time for a name change. They gave the honour to a popular miner named John Likely.

This sleepy town’s naming origins has nothing to do with the province’s friendly stance on marijuana — Stoner takes its name after the nearby Stoner Creek.

Following the trend of naming places in BC after nearby bodies of water, this community takes its name from Cranberry Lake. In turn, the lake itself was named for the cranberries that grew along the shoreline.

The Old Raspberry School in the Raspberry settlement of the Doukhobors . Same structure and construction pattern and process as many other Doukhobor schools in the area at the time . #Doukhobor #Russian #RussianCulture #RussianHeritage #Doukhobors #DoukhoborCommunity #CanadianDoukhobors #120YearsinCanada #RaspberrySettlement #Malinvoye #Raspberry #School

This tiny village tucked away in the Kootenays is an interesting piece of British Columbia’s history. The village is perhaps best known for its Russian Doukhobor settlers in the early 1900s. In fact, traditional communal Doukhobor homes are still standing here today.

So why the sweet name? You can thank the communal raspberry plantation that stood nearby the original settlement.