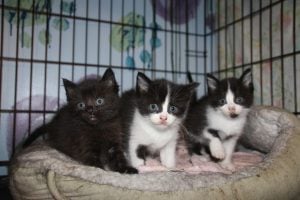 SPCA just closed a months-long case, where they confiscated 136 cats from a single 600-square foot house.

That works out to one cat every 4.4 feet – and that’s not including the cat feces everywhere.

The animal shelter went to the one-bedroom house in April, after neighbours complained of the smell.

“The landlord himself noticed the smell, but just though it was normal for a couple of cats,” said Christine Carey, one of the SPCA animal protection officers to Surrey Now-Leader.

When the SPCA workers entered the house, they found the cats stepping and sleeping in their own feces. There were even dead cats and kittens in the house, and not enough food or water to go around.

It took staff six months to remove the cats, as they took 10-20 at a time to help ease the owner into the change. Three of the cats had kittens, bringing the number from 136-150 cats.

This is a common situation that is often related to mental illness, said Chilliwack branch manager Chloé MacBeth.

The owner now has six cats, which have all been spayed or neutered. The SPCA did not press charges.

“We’ve been consulting with hoarding experts, and the way this file was done is actually best practice in terms of recidivism,” said MacBeth to Surrey Now-Leader.