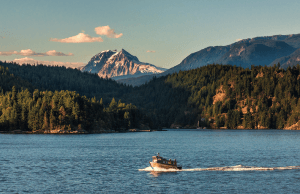 With the 2015 United Nations Climate Change Conference taking place this past November and December, an agreement was adopted to deal with climate change. The Paris Agreement was agreed to by consensus by the 195 participating countries including Canada.

The global pact is a framework to reduce emissions for the reduction of greenhouse gases and national carbon outputs. Nations including the two largest emitters, China and the U.S., now have a goal to keep global warming “to well below 2 degrees C”.

Surging Seas, a sea level rise analysis by Climate Central uses maps to visualize sea level rise. The “independent organization of leading scientists and journalists researching and reporting the facts about our changing climate and its impacts” created the project to depict global cities at risk. A report by Climate Central also suspects that more than 1 million Canadians are at risk of rising sea levels.

The science-based KML layers and 3-D built data in Google Earth allows for fly-over videos of coastal cities around the world including Vancouver:

“Carbon emission trends point to 4°C (7.2°F) of global warming; the international target is 2°C (3.6°F). The outcome will have big effects on future sea levels.”