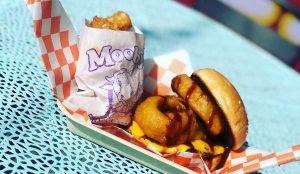 It’s been popping up across the U.S. and made its first Canadian appearance in Toronto late last year before it will finally make its way to the West Coast.

Of course all the food is inspired by the fictional universe of View Askewniverse and the pop-up gets its name from Mooby, the golden calf.

The menu will have everything from Hater Totz and the Cow Tipper. And for those who don’t eat meat, there will be a Beyond Cow Tipper option.

Smith took to social media to make the exciting announcement, saying: “Mooby’s heads back up north next month.”

Tickets will go on sale on March 8th and those interested can get them online. Due to public health orders, they will be restricting the number of guests and time slots.

For more tasty eats in Metro Vancouver, check out our Food section.