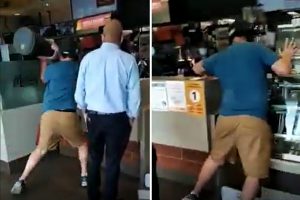 A violent outburst was caught on video at a Richmond McDonald’s.

The incident happened around 3:40 p.m. on Tuesday, July 27 at the McDonald’s located in the Ironwood Plaza.

RCMP were called to the location when a 30-year old Delta man become “irate” and began damaging property inside.

RELATED: The Richmond Night Market Is Now Open and Here’s A Sneak Peek Inside

The man was seen lashing out at staff, pushing over displays and throwing objects before exiting the fast food restaurant.

The video of the incident was recorded by another customer and has been circulating on social media. She claims that the incident occurred due to an incorrect Happy Meal order.

You can see how the event escalated around the 30 second mark in the video below.

Be extra nice today. No one needs this shit. pic.twitter.com/2SpyXyXS9x

The individual was eventually arrested, but put up a fight before that. Two officers were apparently assaulted with minor injuries, and the suspect had some injuries as well.

Police state the investigation is ongoing, although the man was taken into custody and awaiting a bail hearing. He could be facing charges of mischief for over $5,000 as well as with assault of a peace officer.