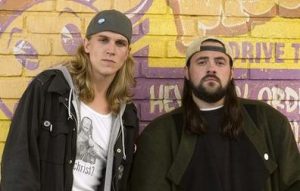 The actor and director was recently named creative ambassador for the Vancouver Film School (VFS) for 2020. That means he’ll be making several appearances around the school and will help set up a new scholarship.

RELATED: The “Saddest Cat On The Internet” Is From BC & He’s In A New Netflix Doc

He had studied at the post-secondary school, but dropped out four months into the eight month program. That’s where he met Scott Mosier and Dave Klein, who helped created Clerks.

CLERKS could never have happened without the time I spent at the @vfs. So I’m proud and delighted to have an acting scholarship named after non-acting me! It’s open to students from around the world – so start the journey toward YOUR first feature by applying today! https://t.co/1PKowbXdeF

“In the hallowed halls of VFS, I … met other like-minded dreamers who would go on to help me tell my stories for the rest of my life,” Smith said in a statement.

While Smith had previously said the school wasn’t hands-on enough, he now credits VFS for teaching him the basics of filmmaking.

He had also said dropping out of school was a matter of getting his tuition back, so he could make Clerks happen.

As creative ambassador, Smith will make appearances on campus and host a “Storyteller’s Studio AMA (ask me anything)” event.

Smith is best-known for creating the Clerks movies and his role in it, as Silent Bob.

For more stories, check out our News section.