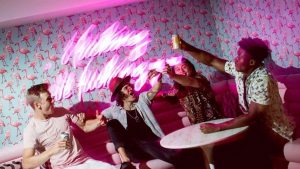 Beauty is in the eye of the beholder, and the art in The Living Room bar in Vancouver’s Hotel Belmont has caught the attention of all kinds of beholders.

Back in September 2019, a human rights complaint was filed over an allegedly “unsafe work environment.”

Making matters worse was that the complaint came from inside the hotel where it’s located, from a group of five employees.

The complaints, however, were not due to reasons like safety concerns or health violations, which led to 65 restaurant closures in Metro Vancouver in 2019, but something simpler: art.

But of course, art is really never that simple.

“Art is not what you see, but what you make others see”, Edgar Degas once said, and because of our unique individual life experiences, everybody sees things just slightly differently.

Case in point: The art in The Living Room bar in Vancouver’s Hotel Belmont.

The Living Room At The Hotel Belmont

According to CTV News, the complaint was centered on “a large print of a nude woman bent over a muscle car” and “bright neon outlines of a naked woman and man outside the washrooms.”

Thank you for all the birthday wishes! I had a surprise party and got to see lots of my beautiful friends, and also finally got to check out @hotelbelmont ! 🍑 #hotelbelmont #birthday #surpriseparty #thankful

taste /tāst/ noun 1. the sensation of flavor perceived in the mouth and throat on contact with a substance.

The group of hotel employees who filed the complaint work in other departments of the Hotel Belmont, not The Living Room, which is owned by Jasmine Mooney.

A spokesperson for the union representing the group said that she found the art to be “very grotesque to women”, and that “the excuse for these images is that they are just trendy and fun, but we don’t think that it’s appropriate because fun doesn’t equate to sexualizing women.”

Mooney, who also owns a brunch and happy hour destination called The Banter Room, said that she chose the artwork herself and does not find it offensive.

She told CTV News that none of her employees have complained about the art, and that “we go above and beyond to ensure our staff are comfortable and secure.”

The bar downstairs, called The Basement, also features a piece depicting “I fucking love fucking you” in bright neon-pink lettering. A quick overview of the Instagram location tag shows that it’s perhaps the most popular piece at the Hotel Belmont and it’s almost exclusively women who take photos with it.

Talking about the art in the bar, Mooney said “It’s edgy and it’s out there and it’s different. That’s the thing with art, it’s so subjective.”

If you liked this article, check out our feature on the Key Party Bar, hidden behind a fake accounting office in Vancouver, as well as the self-aware marquees of the legendary Penthouse Night Club.