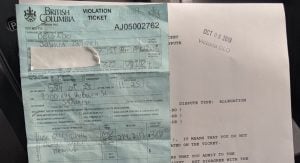 Two B.C. drivers were recently fined for keeping their phone in the cup holder of their car.

While one ticket given to a Richmond senior was rescinded, a Saanich man is planning to fight his $368 fine.

“The law is clear, the cellphone is supposed to be mounted and, you know, it’s not accessible,” said Public Safety Minister Mike Farnworth to Global News.

The Saanich man, Josh Delgado, was fined September 23 while he was at a red light. He said the phone was face down in the cup holder and plugged into the company car’s USB charger.

While the Richmond senior’s ticket was retracted, a spokesperson for Saanich police said Delgado’s ticket would not be.

The Motor Vehicle Act states a person is allowed to use their phone while driving as long as it’s hands-free. The phone must be easily accessible for the driver’s seat and securely fixed to the car or the person’s body.

This has recently come into question, after a man was charged having his phone wedged in between the carseat because it was unsecured and within the driver’s sight.

But this was thrown out when Crown said the, “mere presence of a cell phone within sight of a driver is not enough to secure a conviction.”

Vancouver Police stated drivers may be ticketed for “using an electronic device even if they are not touching it.”

But Delgado is adamant on fighting the distracted driver fine. “I’ll see you in court to defend my right to have my cellphone sitting in my cupholder while driving,” he tweeted.