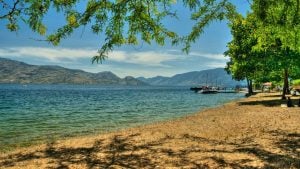 It might be one of the most beautiful lakes in British Columbia; however, Okanagan Lake is also one of the province’s most deadly.

In fact, the lake had twice the number of deaths than any other lake in BC between 2008 – 2016. Specifically, 24 people died at the body of water, compared to 12 deaths at Shuswap Lake. Following this, Kalamalka Lake, known for its vibrant, jewel-toned waters, had 10.

Of course, there are a number of factors that contribute to the number of fatalities. While the lake itself may be more dangerous, people’s level of intoxication, as well as their propensity towards risk-taking, contributes to the figures.

The BC Coroners Service told 604 Now that the number of fatal drownings were most common in the summer months, peaking at an average of 13.6 deaths per year in August.

As such, you should always avoid mixing alcohol with swimming, boating or any water-based activity. Impairment greatly increases the chances of an accidental drowning.

“This is the time of year when we see too many carefree days on the water turn to tragedy due to alcohol, poor judgment or a momentary lapse in supervision of children,” said Dale Miller, executive director, Lifesaving Society – BC & Yukon Branch.

“Although figures are improving, we are working toward a province that is free from drowning.”

The BC Coroners Service emphasizes the need to understand the dangers that may lurk in or near B.C.’s lakes and rivers. Specifically, swimmers should be aware of sudden drop-offs into deep water, unexpectedly cold water temperatures, unexpected underwater obstacles, and unstable or slippery rock edges above cliffs and waterfalls.

While the lake had a staggering number of deaths between 2008 and 2016, it experienced a disturbing number of drownings in 2017. In fact, there were 3 drowning in just two weeks.

Of course, this high frequency takes place during summer months. People frequent the waters for swimming, boating, and water sports.

Furthermore, the lake is extremely large and deep, which makes it more dangerous than shallower, smaller bodies of water.

“Okanagan Lake is called a fjord lake as it has been carved out by repeated glaciations. Although the lake contains numerous lacustrine terraces, it is not uncommon for the lake to be 100 m deep only 10 m offshore,” according to Wikipedia.

As a result, the lake becomes deep extremely close to the shore, which many swimmers may be unprepared for. The lake is also 232 metres, or 761 feet, at its deepest.