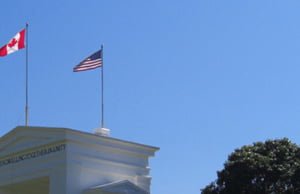 B.C. is taking a step back from its role of screening travellers at the border, officials announced Friday.

B.C. has been leading the effort, since April, to ensure all travellers quarantine for two weeks after crossing the province’s border. Now, that role will return to federal officials.

However, Service BC will continue performing compliance and wellness checks on recent arrivals, during their 14-day self-isolation periods.

“The evolution of federally led border measures has allowed the B.C. public service to step back from border screenings and redeploy our resources to best limit the spread of COVID-19 in British Columbia,” said Minister of Public Safety and Solicitor General Mike in a release.

Since provincial screenings began, B.C. has housed 142 people for the two-week quarantine period or until their self-isolation plan was considered adequate.

This comes after reports showed a loophole to the border closure, where U.S. travellers have been saying they’re on their way to Alaska.

Amid the travel ban, thousands of Americans have been turned away at the border.