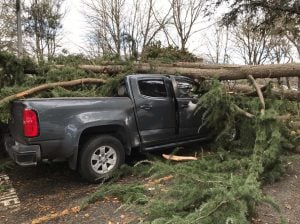 Today’s wind storm is going in the history books.

After closing two Vancouver parks, halting transit, cancelling ferry routes, knocking out power to thousands of BC Hydro customers, and destroying the historic White Rock Pier, the damage is unbelievable.

Gusts of up to 100 km/h have been battering Metro Vancouver all day and is expected to finally ease this evening.

Here are some photos and videos showing the damage from today’s Metro Vancouver wind storm.

This video shows the part of the pier in #WhiteRock that has broken of with one person trapped on the other side. #bcstorm #bcwindstorm pic.twitter.com/xsASoCHjpu

The stranded person on the far side of the pier has been saved #BCstorm pic.twitter.com/ZL8qFKkOxU

Quite the scene out at @BCFerries Tsawwassen ferry terminal. Big storm surge flooding ramps and access to boats. No sailings until at 7:00pm at earliest. Stay safe folks! 🌊⛴ #BCstorm #news pic.twitter.com/yHR2CW63wr

Today’s #BCstorm is a little crazy in the @City_Abbotsford. This barn just went airborne. Watch out for flying debris. Stay inside if you can. @GlobalBC @CTVVancouver pic.twitter.com/cLaEimL9LN

This #bcstorm woke me up this morning, and let me tell you it was not Santa on my roof… 😂😖 waiting for the tornado warning .. lolllll #happybirthdaytome pic.twitter.com/AKikCBbzl5

Tree branches come crashing down near YVR in Richmond. Told the driver of the pickup made it out the passenger door – luckily not injured. Windshield smashed and believe it or not there's another vehicle under there. #BCstorm @CTVVancouver pic.twitter.com/Lc79jHQFrF

RIP to our favourite tree :( Which of course also knocked down my grandpas hedges and his Apple tree #BCStorm #VancouverIsland pic.twitter.com/vy2tvxY1Mc

White Rock firefighters have just told me that leaning power pole, at the corner of Royal and Johnston, could come down at any moment. Entire block of Johnston is cordoned off. @PeaceArchNews @BlackPressMedia #bcstorm pic.twitter.com/izrJpAyl6A

Our maintenance crews are working hard to clear trees/debris on #VancouverIsland. Many sites are a challenge due to contact with power lines. In these cases, crews must wait until @BCHydro deems safe to clear. Thanks for your patience. Photos: W Shawnigan Lake Road #bcstorm pic.twitter.com/SnB2x0ACs0

This is a very crappy thing to happen to my neighbours just before Christmas. Hope everyone is okay. #BCstorm pic.twitter.com/AX1mtWaSjt

Y'ALL THIS TRAIN CAME INTO THE STATION SMOKING AND THE GLASS AND POLES BROKE AND SOMEONE WAS BLEEDING I'M SO SHOOK @TransLink pic.twitter.com/oR8ej0gZ4T

This was the most exciting part of walking home from school #BCstorm #YVR pic.twitter.com/2758ZeRVh5