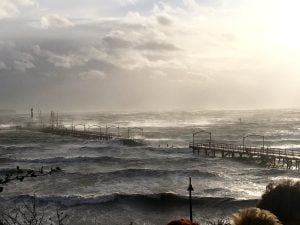 At least one person was trapped on the White Rock pier as strong winds and powerful waves pounded the dock on December, 20.

According to reports, police received calls about an emergency situation at approximately 2 p.m. on Thursday afternoon.

Police explored multiple options to rescue the stranded person, but eventually called in a helicopter.

@WhiteRockRCMP @IAFF2407 dealing with emergent situation at the pier. Marine drive will be shut down until further notice. pic.twitter.com/4ycs6WKG30

The White Rock pier is now split in two after wind, loose boats cause havoc. One person stranded on far end pic.twitter.com/Bmjbr5Nnzg

@MMadryga #Whiterock pier is broken. Guy is trapped on other side. Boats slammed into it pic.twitter.com/nzf9wANd1k

Environment Canada issued a wind warning with gusts up to 100 km/h earlier in the morning. While most municipalities were prepared, it’s fair to assume no one anticipated serious damage like this.