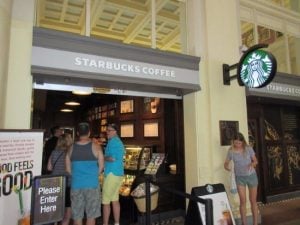 These days Vancouver has a Starbucks on every other block, and we don’t think too much about it. But in the 1980s’ the single location in SkyTrain station meant the beginning of an international brand.

We all know the story of the first Starbucks in Seattle and many of us have probably visited it in Pike Place Market. It bustled along for about a decade before its future chairman Howard Schultz walked in and changed its future.

By 1987, the coffee chain was ready to become international. Its first non-American location opened up shop right here in Vancouver, at Waterfront Station.

It wasn’t until 1996 that Starbucks launched in Toronto, where it opened five stores on the same day.

Starbucks now has 1,400 locations in every Canadian province. As for the territories, the Yukon has one in Whitehorse and Yellowknife, NT is set to open its first Starbucks soon.