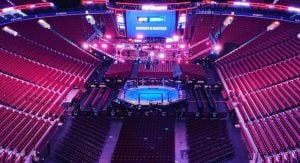 The Ultimate Fighting Championship (UFC) took over Rogers Arena this past weekend, with Fight Night Vancouver on Saturday night.

The UFC comes to Canada a few times year, with a stop in Vancouver every few years, and every time it’s a rowdy event. And it began before the night of the fights, at the fighter weigh-ins.

When the preworkout kicks in 🔋 #UFCVancouver

That’s Michel Pereira, who missed the 171 lbs weight limit by a pound, costing him 20% of his purse. His bounce and activity would continue in the octagon, thought, with a rarely-seen mid-fight back-flip.

WHAT!? 😱 🇧🇷 @MichelPereiraUFC landed a BACKFLIP in round one! #UFCVancouver

He’d go on to lose the fight, however, as Vancouver’s own Tristan Connelly, a UFC newcomer, won the fight via decision. Connelly was a last-second replacement after Sergey Khadozhko had visa issues. And in a sports-movie moment, Connelly took home a $100,000 Fight of the Night bonus.

In another highlight, Misha Cirkunov submitted Jimmy Crute via a rare peruvian necktie, in a potential Submission of the Year candidate.

Todd Duffee, making his UFC return after 4 years away, came out swinging like the Heavyweight he is. However, his fight with Jeff Hughes would be called off and ruled a No Contest after Duffee suffered an eye-poke that resulted in him reportedly seeing double.

And, of course, last but not least: the main event. Ahead of the bout, Donald “Cowboy” Cerrone versus Justin Gaethje was being hyped as a potential Fight of the Year, or even Fight of the Decade.

It was one of the rare match-ups where a full 5-round war that ended in a decision would’ve been more entertaining than an early finish, but that’s not what we got. Gaethje would finish the fight in the first round.

Following the fight, both Gaethje and Cerrone were very complimentary of one another. Both fighters are pretty good guys to begin with, but perhaps being in Canada had something to do with it, too.