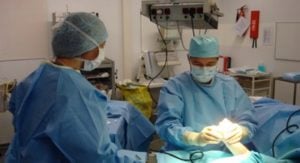 Between 2016 and 2018, Canadian surgeons have left more surgical items in patients than most countries.

More than 550 objects were reported left inside patients, post-surgery, said the Canadian Institute for Health Information study. That includes sponges, medical instruments, and other items.

“Often they are smaller things and they may be things like clips or sponges,” explained Tracy Johnson, CIHI’s director of emerging issues to CBC.

That’s a 14 per cent increase from studies in the last 5 years and more than double the average rate of 12 other recorded countries.

Just below us on the list is Sweden, the Netherlands and Norway.

How BC Compares To Other Provinces

Luckily for us, B.C. has one of the lower rates among Canadian provinces, with Quebec at the highest.

The data is based on just 9 provinces, however, because not all places track the statistic. That can also be said for the U.K., Australia, and the U.S. who don’t report on such cases.

But the reason why objects are left behind could be due to a number of causes.

“Some surgeries are long and complicated and if they have to change people during that surgery because some surgeries last a long time, it may be that things get missed because of that,” said Johnson. “It may be that they don’t have protocols in place — surgical checklists are one of the things that are utilized to try and prevent a number of things happening.”

Canada also had the highest rate of avoidable complications after surgery, at about 90% above average.

But we are doing well in some aspects. We still excelled in areas related to quality of care and the rates of in-hospital deaths from heart attacks and stroke have declined by more than 20% in the last five years.

Have you had any crazy surgery experiences?