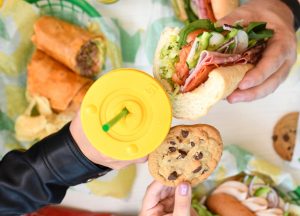 Subway is making headlines again, but this time, it has nothing to do with their sandwiches.

Although they’re globally known for their subs, there’s something else that draws people to the stores – their delicious cookies.

Recognizing this, the company has decided to test demand by testing a new store concept dubbed Cookieway.

It’s no secret that the Subway cookies have become a bit of a habit amongst customers. In addition to your sandwich order, you can easily add on a freshly baked cookie for an additional dollar.

It could be described as being the leading co-star to the sandwich menu. So as such, the franchise decided to test out a pop-up shop that solely sells these popular chewy cookies.

While the first store was merely a pop-up in New York City, it was designed to test the concept with plans to potentially expand acrossthe rest of U.S. and Canada.

CEO Carrie Walsh stated that, “launching Cookieway [w]as a special thank you to our fans, who overwhelm us with love for our cookies and have helped make Subway cookies the co-star of our menu, alongside our subs.”

Time will tell if this will be a pop-up tried up North, or if we can expect actual Cookieway stores to become a thing.