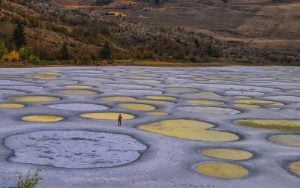 British Columbia has an abundance of hidden gems nestled throughout the province that will make anyone stop dead in their tracks in awe of its natural beauty. Another magical spot you must add to your bucket list is the incredible Spotted Lake in Osoyoos.

The lake is a natural formation of minerals, giving it a spotty appearance throughout. It’s filled with minerals including: calcium, magnesium sulphate and sodium sulphates.

RELATED: 15 Places In BC You Should Start Putting On Your Bucket List

It’s the most visible in the Summer months when most of the water evaporates. When that happens, it leaves the minerals to form in different sizes and colours—such as green, yellow and blue.

Check it out along Highway #3, just northwest of Osoyoos in the Eastern Similkameen Valley.

Spotted Lake was originally known as “Kliluk” to the First Nations people who also believed the spotted patches were sacred and therapeutic.

A post shared by Traveler Of The Same Road (@inception.viral)

The minerals in the lake were also used in WWI in order to manufacture ammunition.

Known as a natural and ecologically sensitive area, travellers often make a stop at the site to take in the unique view.

Location: Okanagan-Similkameen A, BC, V0H 1V5