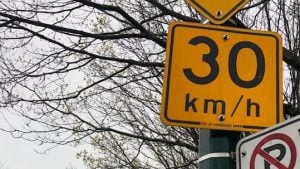 The motion, which was brought forward in April by Green Councillor Pete Fry, calls for the speed limit on residential side streets in Vancouver to be lowered from 50 km/h to 30 km/h.

My motion for 30k/h speed limit on residential streets comes before City Council Tuesday. It's work based on advocacy of many local orgs like @WeAreHub and @bccycle, the previous council, my own personal experiences, and a growing worldwide safety-first movement to slow down… pic.twitter.com/ZC9qKp1bEK

As part of this pilot project, City of Vancouver staff will pick a local street or area to gather results, with the results to be discussed by later this year.

Furthermore, Fry’s motion touches on the BC Road Safety Strategy, which set out the goal of zero traffic fatalities and serious injuries and discussed safe speeds in 2015.. In 2016, the Provincial Health Officer’s Annual Report also recommended a 30 km/h speed limit in urban areas.