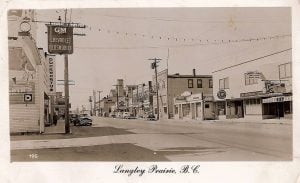 If you’re from Langley, you’re well versed in the quirks that Langley citizens experience.

Willowbrook, Walnut Grove, Aldergrove, Brookswood, Fort Langley, the whole shebang. People who live there may say they hate it but secretly love it, and people who don’t live there are astounded that it’s so far away from the rest of the world.

We get made fun of for being the ‘hick town’ of Vancouver, when actually it’s just a whole lotta farm.

And when someone who doesn’t know the area very well refers to Langley as Surrey mistakenly, it’s hard not to feel indignant about it.

Here’s how you can tell you grew up in Langley:

You Used To Hang Out At Willowbrook Mall In Your Teens

Throwback to your parents dropping you off right outside Sportchek.

There’s a certain nostalgia that occurs every time you enter the Willowbrook Mall. Being the biggest mall in Langley, it was definitely the go-to during the teen years when you had to meet up with your friends.

A Night Out Ending At Gabby’s

The classic country cabaret, Gabby’s can always be relied on. Whether it’s the impatience from waiting at another club/bar and giving up, or it’s where you had your first legal night out. Every night out in Langley always comes back to those sweet, sweet hotdogs – arguably the best around.

Always Having At Least One Friend Working At The Theatre

The spaceship shaped Colossus has been around ever since we can remember, and is notorious for being the hangout spot of Walnut Grove. While Langley is growing, it’s still a relatively small community, and you’re bound to have at least one friend working there. Maybe it was you.

Anyone who’s lived in Langley at some point knows that Downtown Langley is not the safest area at times, especially at night. Straight up refusal from your parents to go inside the 7/11 that’s across Army and Navy was probably a smart idea from them – someone has definitely met a prostitute inside who asked to go home with them on more than one occasion.

While it’s out in the Fraser Valley, Langley is still a ways away from the rest of Metro Vancouver. Meeting a friend literally anywhere else? You’re either transiting or driving.  Either way, see you in an hour! And if you don’t have a car? Make it two.

Casually Crossing The Border For Groceries

The White Rock & Peach Arch border crossing is a lot closer than the rest of Vancouver, and it’s the norm to take a casual jaunt in your afternoon down to the Border for some gas. Or even just some milk and eggs. Bellingham, we see you.

Jaywalking To Avoid The Overpass On 200th

Who remembers life before the overpass on 200th was built? It was meant to make life easier for crossing the road, yet it takes longer to walk up onto the overpass and cross over than it does to just jaywalk.

The best and only Lazer Tag place in Langley, Planet Lazer was the hot-spot for all the cool kids to have their birthday parties at. Let’s be honest, creating your username was one of the best parts of the whole experience.

Hitting Up Willow Video Before Streaming Was A Thing

In the period between Blockbuster shutting down (RIP) and people turning to Netflix, there were the days of Willow Video. Shoutout to the summer days spent at the little strip mall, indulging in Baskin Robbins and picking what movie to watch that night with your friends.

When Farm Animals On The Loose Don’t Surprise You Anymore

Langley is literally 70% farmland, and growing up surrounded by farms that house animals, they occasionally get loose. This happens more often than you would think. At this point, if you see a cow strolling along on the side of the road, Langley-ians don’t even blink twice.

How many countless times have you had the frustration of having to explain to a non-local where Langley is on the map? “Oh I live in Langley.” “Where’s that?” “About an hour away from Vancouver.” “Oh, you mean Surrey?”