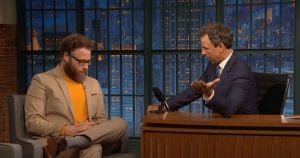 Seth Rogen made an appearance on Late Night with Seth Meyers on Wednesday, August 8th, and Vancouverites are loving it.

For one, the hometown hero was recently named the new voice of Translink.

The enthusiastic Vancouver native stated that he was “thrilled” to take part in the project.  Since then, his charismatic comedic stylings have aired on some of the city’s routes for their etiquette campaign.

On his appearance with Meyers, however, he spoke about a separate issue. Specifically, he talked about how detailed Canadians are often forced to be when explaining where they’re from to Americans.

Rather than simply stating a city, he says they must add a province, as well as a country.

He joked that he’s even had some difficulty explaining “Canada” to Americans.

RELATED: What’s The Worst Thing You’ve Seen People Do On The SkyTrain?

People also love the actor for continuing to give props to the city. For example, he recently proclaimed his love for the Richmond Night Market in a tweet back in June.

“I love the Richmond Night Market and have been going there for years. It’s my favourite food to eat,” he stated.

Vancouver was also named one of the top five most filmed cities in the world. As such, fans of Rogen and other Hollywood stars may get to spot them around the city!