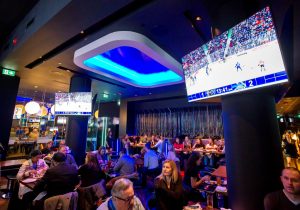 Even though there will be no fans in the stadium, Canuck fans can still go to Rogers Arena. Well, in the SportsBar, anyways.

The SportsBar at Rogers Arena is reopening to kick off the new hockey season, starting January 13 when they open their season against the Edmonton Oilers.

RELATED: Notable 2021 Restaurants Opening In Vancouver To Look Out For

How Are Fans Able To Watch Games Right Now?

Although the stadium is closed, the restaurant is allowed to remain open, as are other restaurants in the city. The SportsBar has its own separate entrance, off the Georgia Viaduct. So, no one will be allowed to technically enter Rogers Arena itself.

If you are expecting a loophole to watch the game live though, you are out of luck.

The curtains will be drawn, and all views of the ice will be completely blocked. The games will simply be broadcasted on the many screens inside the restaurant.

When Is This Happening?

The SportsBar will be open for every single Canucks game, regardless if it’s a home or away game. People can come in as early as 1-hour before the puck drops.

The Canucks will play their first game in Edmonton on January 13, at 7pm PST. They are in Edmonton again on the 14th then play Calgary on the 16th. The game against Calgary will mark the first Saturday Hockey Night in Canada game for the Canucks, which tends to be a big deal for fans and typically generate much business (pre-pandemic).

The Canucks will be home for a 6-game stretch on January 20th, against the Montreal Canadians and then the Ottawa Senators.

Reservations are encouraged, as it’s expected it will be busy. In fact, you can book a table all the way until the end of the season, in September.

For more updates on restaurants news in Vancouver, check out our Food section.