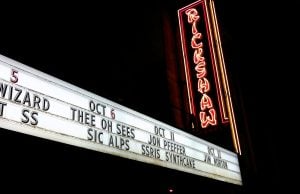 The Rickshaw Theatre on East Hastings is a beloved Vancouver venue and has seen more awesome bands come and go than you can shake a stick at. Thanks to its iconic signage, the venue is easily recognizable — but did you know it wasn’t always called the Rickshaw?

When it was built (as a movie theatre) in 1971, it was called the Shaw Theatre after its owners. Sir Run Run Shaw and Tan Sri Runme Shaw — known as the Shaw Brothers — were big names in Hong Kong’s kung fu movie business. In fact, they were responsible for some of the genre’s most iconic flicks.

Starting out with a production company, the brothers built themselves an empire which encompassed dozens of companies, hundreds of movie theatres, production studios and even amusement parks.

The Shaw Theatre at 254 East Hastings in Vancouver served as the brothers’ base for all North American operations. At the time, it was also was one of the world’s most modern movie theatres. That is, until simultaneous decline in interest in kung fu movies and in the economic fortunes of the DTES led to the theatre’s closure in the 1980s.

For 20 years, it sat mostly unused. Finally, in 2008, David Duprey discovered the empty theatre, realized its potential and quickly reopened it. By 2009, it was operating in its current guise as the Rickshaw Theatre. Nowadays, the venue still recalls its heritage as a movie theatre — from the neon signage outside to the rows of seats still occupying the rear half of the venue.

Two years later, in 2011, the business again changed hands, and new owner Mo Tarmohamed became responsible for the programming that has made the Rickshaw so popular. Since then, tonnes of great bands — from legendary names like DOA to upcoming local artists like Anchoress and Dopey’s Robe — have raised its roof.

Mo, a self-professed music nerd who has been going to local shows since the ’70s, is passionate about the venue. Although he worked for years an accountant, Mo got to the point where he “simply couldn’t stomach another soul-sucking corporate job.” He wanted to do something with music, and after a meeting with David Duprey, ended up buying the Rickshaw. The rest, as they say, is history.

“I really enjoy being around like-minded people. I enjoy interacting with patrons, bands and the great bunch of people who work here. We’re all passionate about music, and especially live music, and it shows,” Mo says.

He believes that what makes the Rickshaw special is its friendly, welcoming atmosphere, saying: “Patrons often tell me how friendly the Rickshaw personnel are; from their initial dealing with security and then subsequently with the bar staff. And bands often remark on how courteous and professional our tech group is. Bands frequently encounter varying degrees of “attitude” from sound guys at various venues. Our guys are very attentive to bands’ needs and you can tell during soundcheck a sense of camaraderie and a purposefulness to make sure we give the audience the best performance possible.”

Upcoming shows at the Rickshaw Theatre: