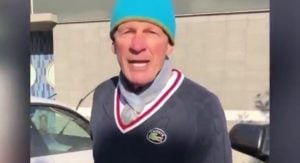 Yet another person’s racist rant was caught on video this past weekend, this time occurring in Richmond after a man was called out for breaking a stata bylaw.

The incident, first reported by City News, occurred in Richmond, when an Asian woman called out a Caucasian man who was taking up multiple parking spots and washing his car. The woman and the friend she was with noted the nearby sign that explicitly banned car washing.

After the woman exited the car to take a photo of the man’s car and license plate, the man became agitated.

“I have fucking Chinese”, he said. “This is a fucking invasion. Go back to your country.”

This incident comes a week after an angry female customer at a 24/7 Shoppers Drug Mart in Burnaby was caught on video yelling at store employees, telling them to “Speak English in Canada.”