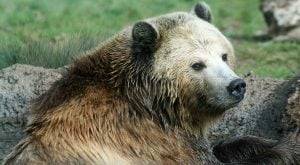 When Ken Bayne was playing a round of golf in North Vancouver, Monday, he was met by what he called a “frisky” dancing bear.

Bayne was playing at Northlands Golf Course with a few friends that morning when they saw the bear darting out of the bushes.

The creature also went for a swim in a water hazard, before encountering a rake – soon to be his dance partner.

“We went over to take a picture while he took one look at us, got out of the pond and came up onto the fairway,” Bayne said to North Shore News. “He was a pretty healthy-looking bear. It was amazing – beautiful, beautiful coat. And frisky. He turned and looked at us and then kind of wandered off into the bush over to the 18th fairway.”

This beautiful fellow joined us to play the 18th at Northlands yesterday. Had some trouble with the grip!

The bear ran up to the sand trap, when he noticed the rake and stopped to toss it around.

“The bear played with a rake for 30 or 45 seconds, tossing it in the air and he was having a great time and then he just picked the thing up and ran into the bush. … It was pretty funny to watch, I must admit,” said Bayne.

Bayne was able to catch it all on film, making a celebrity out of the furry creature.