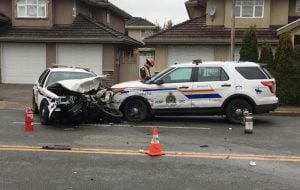 A patient from a Richmond Hospital escaped Monday afternoon and wreaked havoc along the way.

According to CTV News, Richmond RCMP responded to a call from a hospital after a man who was not permitted to leave tried to escape.

The RCMP successfully found the man, only for him to steal the RCMP cruiser and drive off.

According to the RCMP, the man then collided with two vehicles near the intersection of Gilbert Road and Donald Road. One of the two vehicles was an unmarked police vehicle.

The man would then crash into a third vehicle near Blundell Road, seriously injuring the female driver behind the wheel. An RCMP officer was reportedly also injured, but his injuries are considered minor.

Pictures and video footage from after the incident show heavy damage to several vehicles.

The hospital the patient escaped from has not been named, but based on the proximity, it was likely Richmond General Hospital.

According to CTV News, the Independent Investigations Office of British Columbia is investigating the incident. The IIOBC investigates all incidents involving police that results in serious harm or death.