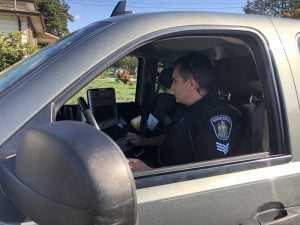 Police are squashing the rumour that they’re pulling drivers over for not social distancing – much less ticketing them for it.

RELATED: BC Hydro Is Offering A Three-Month Relief From Bills To Some Customers

The police department added in a tweet they don’t even have the authority to do so – despite rumours spread online. And while they’re on the road, the police force’s role hasn’t changed.

A rumour is circulating that #DPD officers are pulling over vehicles with more than 1 person, checking the IDs and addresses of each passenger, and then apparently fining those people who are not from the same household for not practicing social distancing. pic.twitter.com/8Bpec1MGM6

“Our officers are continuing to enforce the Motor Vehicle Act,” they tweeted. “And that includes driving behaviour that contributes to crashes, such as distracted driving, speeding or running red lights.”

The post comes after the rumour was first spread through a 30,000-member Facebook page, Coming Together (Vancouver).

“Apparently the VPD pulled [a friend of a friend] over, asked to see their drivers licences and when they saw they didn’t live in the same house, fined them $1,000 each,” the Facebook user posted. “I’m curious about the legality of this.”

“Right now, Vancouver Police will not be issuing tickets for non-compliance with social distancing,” she said. “As for now, the City of Vancouver has taken the lead on this and their bylaw officers will be enforcing this bylaw.”

However, Visintin said it’s possible such orders will be enforced in the future.

“Anything can happen as this progresses, but as of right now, it will be police enforcing the law,” she said. “The city is the lead on this.”

Vancouver recently said people in public could receive $1,000 fines for not social distancing. And from Friday to Sunday last week, police handed out more than 400 warnings.

For more B.C. news, head to our News section.