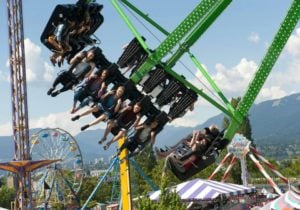 After an incident with an amusement ride at the Ohio State Fair, Playland took cautionary measures into their own hands by temporarily shutting down “The Beast”.

The freak accident occurred in Ohio with a ride made by KMG, the same company which built The Beast. Therefore, Playland felt the need to shut down The Beast to ensure everyone’s safety.

Playland has issued an official statement on the matter today, saying that “after rigorous supplementary inspections, the Pacific National Exhibition, operators of Playland Amusement Park, have made the decision to open The Beast as scheduled today.”

All Playland rides undergo inspections by ride technicians and the operations team twice a day. They also receive inspections annually by a world-leading third-party industry contractor.

The ride was bought by KMG and assembled at Playland. It underwent immense safety inspections and testing prior to opening back in 2015.

The malfunctioning ride in Ohio killed one person and injured seven others.The horrific incident was caught on tape as shown below.