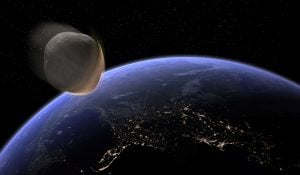 An asteroid the size of a house is about to fly really close to the Earth today.

The asteroid is called 2012 TC4, and it was first discovered by scientists back in 2012. They have been anxiously awaiting for it to fly past Earth ever since.

While it could do some serious damage if it were to collide with the planet, scientists assure that it will safely avoid contact. It is estimated to be approximately 50 to 100 feet in size. It will miss Earth by about 42,000 kilometers, which is just outside the range of geostationary satellites. It is about one tenth of the distance between our planet and the moon.

That seems like a long distance away, but scientists consider it an uncomfortably close encounter. While there was no chance that it would have hit Earth, a space rock of that size could do some horrendous damage if it did.

This celestial event has spurred some additional research into the study of asteroids. Due to the extended period of time the researchers had to study the rock before it passed earth, they can use the experience for future reference.

Indeed, the knowledge serves as information for coordinating the International Asteroid Warning Network. This service serves as an important tool for providing a safety mechanism in case of a serious threat in the future.

In order to fully observe this sublime spectacle, you will require an 8-inch telescope or bigger.

If you think you have what it takes to defend Earth from invaders, and to defend other planets from the evils of earth, check out this 6 figure NASA job offer.