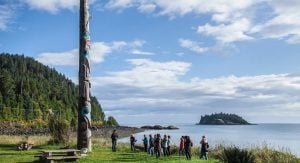 The New York Times released its annual list of 52 must-visit places, and British Columbia’s Haida Gwaii is a name on that list that may surprise some.

The list was published late last week and included only two Canadian destinations: Haida Gwaii, British Columbia at #26 and Churchill, Manitoba at #29.

To make the list, the New York Times explained, “it is not enough for a place to be beautiful, amazing and culturally significant. It also has to answer the question, why now? Why this place, this year?”

Describing the destination, they said: “On this isolated archipelago off the coast of British Columbia, you’ll see more bald eagles than people on hiking trails and experience powerful Indigenous sites in near solitude.”

RELATED: 3 Sustainable Travel Trends To Help You Travel Guilt-Free In 2020

“Visitors are rewarded with a deep connection to place and people, especially at SGang Gwaay (Ninstints), an extraordinary UNESCO site in Gwaii Haanas National Park Reserve and Haida Heritage Site, accessible only by boat”, they continued.

They also noted that “In June 2020, Intrepid Travel will launch its first Haida Gwaii Islands Expedition, an eight-day trip from mainland British Columbia with four nights in Haida Gwaii and a Watchmen-led visit to K’uuna Llnagaay(Skedans), another deserted village with Haida poles overgrown by moss and grass.”

Formerly known as the Queen Charlotte Islands, the archipelago consists of 150 islands spread across approximately 3,930 square-miles.

The islands sport a population of less than 5,000, about half of which are indigenous, and the islands have an arts and culture scene that reflects that.

In Metro Vancouver, however, Haida Gwaii is perhaps most commonly associated with earthquakes, which occur in the region regularly, due to its location along the Queen Charlotte Fault and its proximity to the Cascadia Subduction Zone.

According to Go Haida Gwaii, however, the destination is a great place to stay grounded. “There are no chain stores, fast food franchises or large hotels.”

“Once you’ve reached the edge of your world, ours begins.”

For more great places to explore in British Columbia, check out our Travel & Outdoors section!