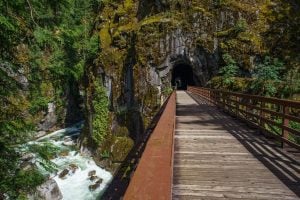 Photo: Scenery Around The World

A district that’s often overlooked, the Fraser Valley has a countryside charm that can’t be found anywhere else. It’s expanding as the days go by, incorporating modern with rustic – a perfect blend of enchanting hospitality.

We’ve compiled a list of things to do in the Fraser Valley before you die, and there’s something for everyone!

Things To Do In The Fraser Valley

About 15 minutes outside of Abbotsford, McDonald Park is the perfect way to indulge in some late night stargazing. You’re able to view the Milkyway against a pitch black background, making the cosmos pop out brighter than ever.

Is there anything more captivating than a brightly coloured sunset?

Cultus Lake Provincial Park in Chilliwack is bountiful when it comes to beachy, sun-clad lake days. You can either watch the rays go down on the beach, or paddle off into the sunset in a canoe or kayak. Either way, it’s definitely something to experience at least once.

Fishing in the Fraser River

Fraser River is the longest river in all of British Columbia, and while it has calm, murky waters, you would never think what the river holds underneath.

It’s home to pre-historic sturgeon, the gargantuan fish that survived two ice ages. They’re the largest freshwater fish in all of North America, and if you try your hand at fishing, you can view one of these majestic creatures for yourself.

Global News reported that a golden sturgeon was caught towards the end of last year, weighing in at 600 pounds and being so rare that experts had never even heard of it!

Just east of Hope, the Othello Tunnels have been around since the early 1900s. They’re a series of five tunnels connected by several bridges. The cliffs stand at 3,000 feet tall, made out of staggering granite all the way up.

Named after the Shakespearian play by engineer Andrew McCulloch, they’re since become one of the most iconic parts of the Fraser Valley.

Wine Tasting In A Chapel

There’s over 30 wineries in the Fraser Valley, each with their own distinct flair. When it comes to Seaside Pearl Winery, what makes them unique is not only their flavours, but the fact that their winery is in a chapel.

Located in Mount Lehman, Abbotsford, it’s the perfect place to head for a picnic. Enjoy the scenery with a glass of locally made wine in hand – the best way to end a hot summers day.

A post shared by Kensington Prairie Farm (@kensingtonprairiefarm) on Oct 17, 2017 at 3:56pm PDT

Kensington Prairie Farm is nestled within the depths of Langley, offering guests a pleasant surprise within the countryside.

It’s 45 acres of land, housing 50 friendly, inquisitive alpacas. A mixture of rescue, imported, and locally raised alpacas, the farm owners lovingly raises them and raises awareness about the species.

Stop by and make a new best friend today!

What a show… and the movie hasn't even started yet! ❤️ #sunsetchaser #funkyjunkinteriors #sunset #bc #sunsets

Maybe you know it from Riverdale, as Jughead fights hard for his local drive-in theatre. Either way, the Twilight Drive-In in Langley is one of the last three remaining in all of British Columbia.

A nostalgic throwback, visiting the drive-in is great for any low-key night out. Grab some popcorn, some blankets, and get ready to watch!

The best part: you don’t have to worry about dressing up, because you’ll be in the comfort of your own car.

@tinabobina119 wanted to get out with me and explore today, so I caved

Located along the Chilliwack River, Chipmunk Caves are the community’s delightful secret.

It’s a short ten minute walk down to the trail, allowing visitors access to the caves that wrap around the mountain. Rope is available to make the climb easier, as well as several stairs.

Bring a headlamp and make sure to be careful! (If you have claustrophobia, there are some tight spaces to go through as well.)

Comparable to the novel A Secret Garden, the serene International Friendship Garden in Abbotsford is right beside the Clearbrook Library. It was created with the intern of celebrating diversity within the community.

Its main features include a golden tree and a waterfall, with the golden tree erected to honour several women from Abbotsford who lost their lives in a car accident.

Get into the Halloween spirit this October by taking a Grave Tales Historic Tour around Fort Langley!

It’s a two to three hour event, where visitors follow their storyteller around the Fort Langley Village at night for chilling tales. The 6PM event is for 19 and younger only, while the 7PM, 8PM, and 9PM is for 19+.

You end the night around a campfire with some hot chocolate (to warm you up after those chilling tales, obviously).

Located on the South end of the Fraser Valley, Harrison Hot Springs was discovered in 1858 by settlers. The hot springs fluctuate between 40 and 60 degrees celsius, and for visitors, there’s a 38 degrees celsius.

Need a staycation that includes a spa day? This is the place to be.

#HoneyFact Monday! Did you know an ancient cave painting was discovered in Valencia, Spain, that depicts a human figure removing honey from a hive, and it could date from as far back as 15,000 years ago? #exploreabbotsford #circlefarmtour

Otherwise known as “the nectar of the gods”, honey wine is considered to be the first alcoholic beverage ever consumed by mankind.

Campbell’s Gold in Abbotsford produces Honey Mead. It’s available in both dry and sweet varieties, and made out of a mixture of honey, water, and yeast.

Did you know you can take a safari through the wilderness right here in the Fraser Valley?

Fraser River Safaris offer people the unique experience of floating through the Fraser River and embracing the BC wilderness. Bring binoculars, and sneak a glimpse at bears, seals, sturgeon, salmon, and bald eagles.

They’re available May through October, with booking starting January 3rd.

"Such a lovely day yesterday we just decided to go for a drive. There are so many beautiful spots along the Fraser Canyon …' Thank you for posting this great Instagram @helloraincity! http://www.hellsgateairtram.com/ #HellsGateBC 🚠🔥

Named after one of the comments Simon Fraser made during his search for a better route during his fur trading days, Hells Gate is a narrow, thrashing body of water that flows through a 33 metre wide passage.

Its located in the Boston Bar, and visitors can fully experience it by taking an airtram over the water – one of the perpendicular fully suspended trams in all of North America.

Skydive Over The Fraser Valley

A privately owned airpark, The Drop Zone in Abbotsford offers incredible, panoramic views of both Mount Baker and Vancouver Island.

It was one of the first skydiving centres in all of North America, having been around since the 1950s.

Fort Langley is the most historic place in all of British Columbia, and for good reason: it’s also the birthplace.

You can travel back in time to the 1800s and experience gold panning, blacksmithing, and barrel-making. Pioneer life during the origins of the Hudson’s Bay Company was bountiful, and modern storytelling helps shape visitors see it through their own eyes.

Fresh beer always tastes the best, and the Fraser Valley’s craft breweries are about as close to the farms that grow their hops as possible — in some cases, they’re neighbours. . Watch the full video at the link in our bio! . . . @thefraservalley // @tourismabbotsford // @tourismlangley // @tourismchilliwack // @hellobc // @explorecanada // @oldyalebrewing // @chaossolacebeer // @ravensbrewing // @fieldhousebrewing // @deadfrogbrewery // @tradingpostbrewing //#BCAleTrail // #explorebc // #explorecanada

Fraser Valley is where hops have been grown for more than a century. Which is why an abundance of craft breweries have been popping up recently, each with region-specific flavours.

Follow the Fraser Valley Ale Trail and try and hit every single brewery in the area, and decide which one is your favourite!

Dating all the way back to 1912, this 100 year old powerhouse at Stave Falls is a must-see.