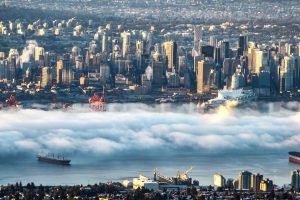 Careful where you step, Metro Vancouver has just been blanketed in a fog so thick, you’d think you were under the covers.

Environment Canada issued a fog advisory warning for the City of Vancouver, Metro Vancouver and the North Shore today.

Residents posted photos of the fog from their neighbourhoods and it’s eerie to say the least:

With visibility nearly at zero, the report notes people should be extra cautious while driving on the roads.

According to the report, fog has moved onshore due to a strong inversion over the south coast.

Although the fog is expected to clear for Metro Vancouver by morning, Vancouver Island, the Sunshine Coast and the Gulf Islands can expect the fog to persist until Tuesday.