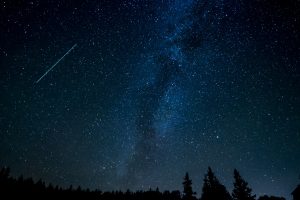 Skygazers, there’s something to look up for this week. The Eta Aquarid Meteor Shower will reach its peak on May 5th and 6th.

What makes this sight so special is that the meteor showers are actually made up of the dust that is left behind the famous Halley’s Comet.

According to The Old Farmer’s Almanac, “obviously, the comet is not there now, but the dusty debris left in the wake of previous apparitions of this famous comet flows along its orbit like a river of cosmic rubble.”

RELATED: 11 Places To Catch A Romantic Sunset In Metro Vancouver This Spring

The phenomenon is known as an Earthgrazer because the orbit of Halley’s Comet very nearly intersects with the orbit of Earth during the first week of May.

“When Earth passes through this region of space these tiny particles crash into our atmosphere at high speeds and are consumed in a fiery streak of light—a meteor, or ‘shooting star,’ is the result.”

The Eta Aquarid Meteor Shower will be visible form May 4-6. However, it will be more visible in the early morning hours of May 5 and reaching the peak on May 6, just before dawn.

The best time for star gazing is in general an hour or two before twilight. It is recommended that you give yourself at least an hour to watch any meteor shower because they tend to come in spurts and it can take as long as 20 minutes for your eyes to adapt to the dark.

While you don’t need any special equipment to view it, it helps to find a dark and open sky away from the city lights.

When: Reaches its peak during the early morning hours of May 6

For more things to do and see, check out our Outdoors section.