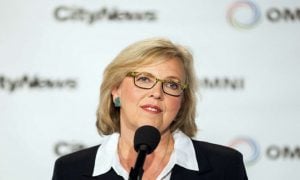 Elizabeth May has announced that she is stepping down as Leader of the Green Party.

“We achieved more than one million votes for the first time ever,” May said. “As I look around the world … there is no other country with first-past-the-post that has achieved what we’ve achieved.”

Her reason for stepping down at a Federal level is due to a promise she made to her daughter. She had told her 28-year-old daughter the 2019 election would be her last time running as party leader.

However, May said she will continue in her role as a B.C. member of parliament and will be the party’s parliamentary caucus leader. She won her riding of Saanich-Gulf Islands by securing 48.8% of votes.

May has been running the Green Party since 2006. The party received the second-most votes in its history this election under May’s leaderships. The group achieved 6.5% of the national vote, compared to 6.78% in the 2008 campaign.

In the meantime, former journalist Jo-Ann Roberts will serve as the party’s interim leader. There will be a leadership vote in October 2020 in Charlottetown, P.E.I.