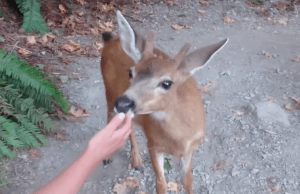 Dubbed as the “downtown deer”, a young buck has taken Vancouver’s social media scene by storm, and is showing no signs of cutting his vacation in the city short.

In his latest appearance, the downtown deer is seen on film interacting with tourists in Stanley Park. At one point in the video, the deer even licks the tourist’s hand.

The downtown deer first made its Vancouver debut on July 21, when he swam from the North Shore into Stanley Park. He wasted no time and explored majority of the downtown core including visits to Yaletown and English Bay. He is now expected to be living in Stanley Park.