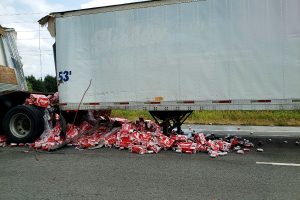 Traffic was at a stand still on Tuesday as hundreds of beer cans littered onto a street in Coquitlam.

It was a sad sight for beer lovers, and an even worse one for driver as a semi truck trailer full of beer broke loose right off Lougheed Highway near Colony Farm Road.

No one was injured in the accident, which was caused when the front of the semi truck trailer split open and dumped cases of Budweiser onto the road.

The incident occurred around noon, but was still being cleared at 9 PM in the evening. This caused congestion throughout the day in an area already known for high traffic.

The right lane was completely blocked while the middle had to be cleared before traffic resumed.

Fortunately, most of the mess was off to the side and did not damage any other vehicles.

Anyone need a bud? It’s all over the street in Coquitlam right now. #Budweiser #Vancouver #Coquitlam #BEER pic.twitter.com/UjhCDFCRz9

Eb Lougheed Hwy before Colony Farm Rd, a truck lost a load of beer. Bottoms up! (No one injured, so I can sneak that joke in) Cheers! 🍻 #coquitlam @NEWS1130Traffic @JACK969van pic.twitter.com/P0SJtKmXdE

It remains unclear what happened to the damaged products, and most people online hope it didn’t go to waste.