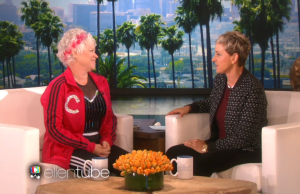 A retiring 60 year-old Surrey B.C., teacher, Shirley Clements, who teaches P.E. and dance at North Surrey Secondary School, is wowing audiences across the world with her dance moves.

Earlier this year, Clements uploaded a video to YouTube of herself “killing a hip-hop routine” alongside her students. In June, Ellen Degeneres shared the video on Ellentube, which resulted in an uproar of attention and positive feedback for Clements as the video garnered over two million views on the site alone.

“It’s surreal, it’s totally surreal,” said Clements. “You give something because you want to give a present to somebody and someone had said to me… that maybe you shouldn’t do the dance because people don’t know who you are. And I thought ‘well that’s it then. If I do this, they won’t forget’.”

Just recently, Ellen invited Shirley Clements as a guest for her show where once again, the 60 year-old broke it down, this time for a live audience. Even though Clements had to travel to California for the show recording, she brought 12 of her hardest workings students along to share the spotlight.