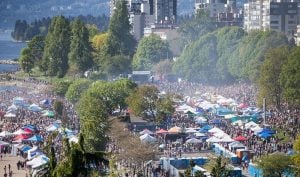 Ahead of the annual 4/20 Vancouver event at Sunset Beach, criticism of the “celebration” is mounting against organizers.

The largest concern around this growing event is the damage it leaves behind and ultimately what it costs taxpayers.

This issue of rising costs was highlighted in a leaked memo from Vancouver city staff to council that shows how much money is put towards this event.

Here’s the breakdown of the costs incurred before, during and after this unsanctioned event over the last two years at Sunset Beach:

In total, the pro-marijuana protest has cost taxpayers more than $580,000 over the past two years at Sunset Beach and the Vancouver Art Gallery.

In 2018, Sunset Beach was closed for several weeks to clean up and repair the area after the annual Vancouver 4/20 event. An estimated 40,000 people packed into the area, leaving behind a large amount of garbage and damage.

At the time, Vancouver Park Board Commissioner Stuart Mackinnon said that his staff needed to close the space for “major rehabilitation”.

“…A troubling loss of park space.” #VanParkBoard Chair Stuart Mackinnon surveys damage to #SunsetPark field this morning after 4/20 event. The field will be closed for up to 10 weeks for major rehabilitation. @betterparks pic.twitter.com/g9HPHd86z6

Organizers have stated in the past that they would cover the costs of sanitation, traffic control and engineering. However, they are not willing to cover the costs of policing, as protest are not required to pay for policing costs.

During the event in 2017, the majority of costs were spent on policing. The city claims it spent $170,670 for Sunset Beach and the Vancouver Art Gallery. As a result, even if the event were moved elsewhere, it would still incur these hefty costs.

As we prepare for this year’s pot protest, it’s expected to cause even more damage and as a result, cost taxpayers more money.

The event falls on a Saturday, which could attract larger than usual crowds, while the forecast calls for clear, sunny skies throughout the day.

Furthermore, hip-hop group Cypress Hill will be performing a free concert. Police are already warning parents that the annual celebration will be a huge draw for teens.

“With the warm weather, the long weekend, and the free concert, we recognize that this year’s 4/20 event may be a big draw for teens,” says Sergeant Jason Robillard, VPD.

The Park Board argued that allowing Cypress Hill to perform would only add to the chaos, bringing bigger crowds than usual to Sunset Beach.

Future of the Event

Back in February, the Vancouver Park Board passed a motion to keep the annual 4/20 festival away from Sunset Beach by 2020.

The City of Vancouver has been looking for alternative locations since the festival made the move from the Art Gallery to Sunset Beach, without any luck.

While no doubt a popular event, it’s ironic that the event is still considered a protest when recreational marijuana is now legal across Canada. Many believe the event should not be operating with a proper permit from the city.

If you are planning to attend the event, please enjoy responsibly and clean up after yourselves before you leave the park.