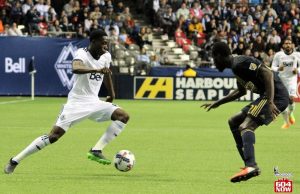 The Vancouver Whitecaps kicked off the MLS season in front of 19,083 fans on Sunday, March 5th. Sunday evening was an unusual slot for the game against Philadelphia Union, meaning attendance was perhaps lower than might have been expected. Nonetheless, led by the Southsiders, the crowd was in good spirits.

It didn’t translate on the pitch, though, with the game ending 0-0. Even Philadelphia’s coach, Jim Curtin, had to admit that it was “not the most beautiful game of soccer” and that it was “dull for the fans.”

Despite that, the fans enjoyed themselves, and there were good signs for the season ahead. There was plenty of noise from the crowd, manifesting in call-and-response chants of “White! Caps!” between the two halves of the stadium, as well as soccer’s traditional heckling of the opposition goalie. It boils down to this: The fans are ready; let’s hope the ‘Caps can provide the performances they deserve to see.

Based on Sunday’s atmosphere, it’s well worth heading down to future games at BC Place. The next game, against Toronto FC, takes place on Saturday, March 18th, 2017 and kicks off at 1pm PST. The East Coast/West Coast rivalry should only add to the atmosphere.

Vancouver Whitecaps Vs. Toronto FC at BC Place

Time: Kick off at 1pm

Where: BC Place, 777 Pacific Blvd, Vancouver