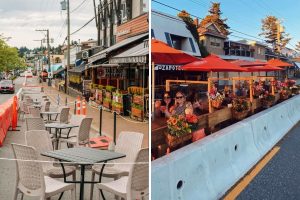 Despite all the pre-planning of turning White Rock’s Marine Drive into a massive patio, it appears it may end sooner than we thought.

White Rock city council had decided to turn the area into a one-way traffic route starting on June 7, and it was originally planned to stay in place all summer until September.

However, there was a motion passed that the two-way traffic may return if restaurants were allowed to reopen and return to full capacity. Which, as a result of the Restart Plan, they have as of July 1st.

Since the single-traffic lane has been in place, there has been some concern and push back on the decision. Many questioned whether this was the right call for the already highly congested area.

A council meeting has been called for 4:00 p.m. Monday, July 5 at White Rock Council Chambers. The meeting will be focusing specifically on East Beach and calls on business owners and operators to attend to discuss their experiences and opinions on the temporary lane closure.

We want to hear from East Beach business operators on Monday July 5 @WhiteRock_BIA @Explore_WR @sswrchamber – we need your input ! Yeah or Nay ! pic.twitter.com/wgSVC0pbLM

Pending what comes from the discussion, we may look at an early closure to the summer street patio along White Rock’s waterfront.

Stay updated on what’s happening in Metro Vancouver, check out our News section.