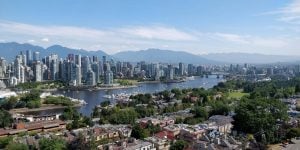 Well, it’s official. Vancouver is the second-least affordable city in the WORLD.

The only other city to surpass Vancouver to take the title of the least affordable city in the world was Hong Kong.

RELATED: Vancouver Too Expensive? Win This Luxury Home in Alberta For $25

This is the ninth straight year Hong Kong has ranked at the bottom, or top of the list. It depends on how you look at it.

According to Bloomberg news, a demographia study showed that Vancouver ranked as the second-least affordable housing market, leapfrogging over Sydney, Australia.

It’s no wonder that people are leaving Vancouver to live elsewhere in Canada.

The study covered 309 metropolitan markets across eight countries including Canada, Australia, the United Kingdom and the United States for the third quarter of 2018.